Back to Past Events
DuoDuo 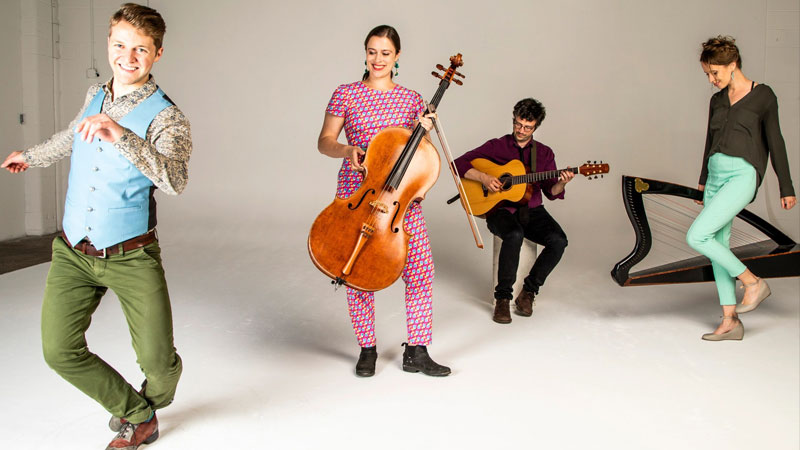 This show will be one 75 minute set. For those of you who play an instrument, bring it along for an aftershow jam.

The DuoDuo Quartet presents an unforgettable night of music, song, and dance, spanning from the intimacy of each duo to a collaboration featuring all four of these innovators and masters of their respective traditions and instruments.

Michigan-born percussive dancer Nic Gareiss and Edinburgh harpist Maeve Gilchrist met while teaching at the Shasta Fiddle Summit in Northern California. They continued their musical relationship with spontaneous collaborations at festivals and chance meetings and later toured together as part of Darol Anger’s band, ‘The Furies’, finally making their duo debut at the Celtic Connections festival in Glasgow, Scotland. Sharing a deep respect for traditional music and culture while drawing on contemporary elements of music, movement, rhythm and improvisation, Nic and Maeve have emerged from the vibrant new acoustic scene as innovators in their fields. The percussion and drive of Nic’s footwork combined with Maeve’s melodic and improvisational sensibilities make for an explosive duet sure to delight both the ears and the eyes.

Natalie Haas is one of the most sought-after cellists in Celtic music today. She and Scottish fiddler Alasdair Fraser have toured as a duo for 18 years, wowing audiences at festivals and concerts worldwide with their unique sound. She has appeared on over 50 albums, including those of Cape Breton fiddler Natalie MacMaster, Irish greats Altan, Solas, and Liz Carroll, and Americana icon Dirk Powell. A graduate of the Juilliard School, Natalie is currently based in Boston, where she is an associate professor of cello at Berklee College of Music.

Montrealer Yann Falquet is one of the most creative acoustic guitarists in today’s Québécois music scene. Over the last fifteen years, he has recorded five albums and toured the world with French Canadian power trio Genticorum. Over the years, he has developed a unique personal guitar style for Québécois folk music, rhythmically powerful yet subtly complex. In the last few years, this husband and wife team have been performing together as a duo, performing a mix of Québécois traditional songs and new takes on folk music from throughout Western Europe.

“It’s an unusual blend of instruments; cello, harp, guitar and feet, but they’ve played together as friends for so long… the results [are] simply magic.” – CTNOW Hartford Courant