Back to Past Events
Debra Cowan & John Roberts 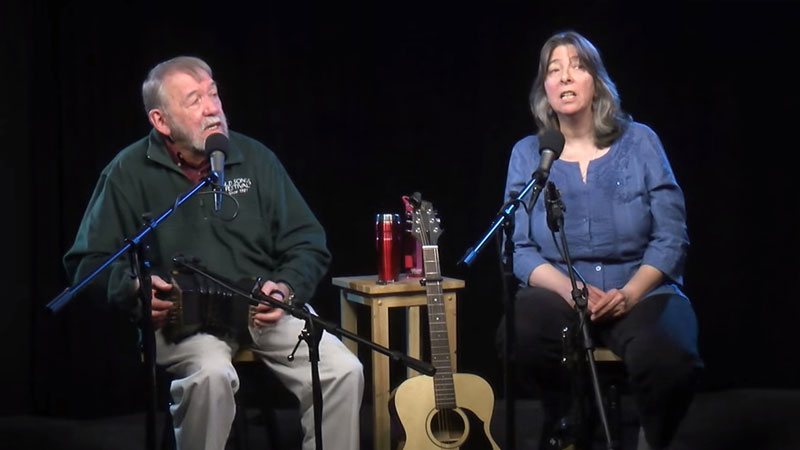 It all started with a question in 2009: “How are you getting to Chicago?” And with that, folk musicians John Roberts and Debra Cowan decided to team up for a series of small concerts in Pennsylvania, Ohio, Michigan and Illinois before arriving as separately booked artists at the Fox Valley Folklore Society’s annual festival. The combination of car–pool and mini–tour was successful enough that John and Debra continue to do more performing together both in the USA and in 2011, with a successful tour in the United Kingdom.

For over 45 years, British expatriate John Roberts has been singing and playing old songs, meaning that many of the songs and tunes in his extensive repertoire can be traced back at least one hundred years. He is also considered one of the foremost Anglo concertina players in the English-speaking world and uses the banjo for unique settings in many of the songs he sings. He can give the background of any song he performs, often telling the listener the circumstances from which it might have been written and from whom the song was collected. John and his long-time music partner, Tony Barrand (another British expatriate who appeared with John at the Brew in Nov. 1996) are often cited as influences and mentors to many listeners, singers and musicians when it comes to traditional folk music of the English speaking world.

Debra Cowan was once asked what kind of songs she writes. Her reply? “Bad ones. Besides, there are so many good songs out there written by others and they should be sung.” Her captivating warm alto carries each folk song she chooses with such emotion that you’ll forget that they were written by others. She performs a cappella and with guitar in the great tradition of folk singers like Joan Baez and Judy Collins, with a clear vocal that calls forth the ghosts of long past but can also offer a more modern urban landscape. In her newest release, a live recording entitled “Among Friends”, she demonstrates her ability to interact with her audience and have them enthusiastically sing along on choruses and refrains.

“…Debra Cowan and John Roberts reminded me of why I love folk music so much – it’s the ripping yarns, the sparse tunes, and the joy of singing along.” – Rob Weir, Off–Center Views